The History of the Camel Toe 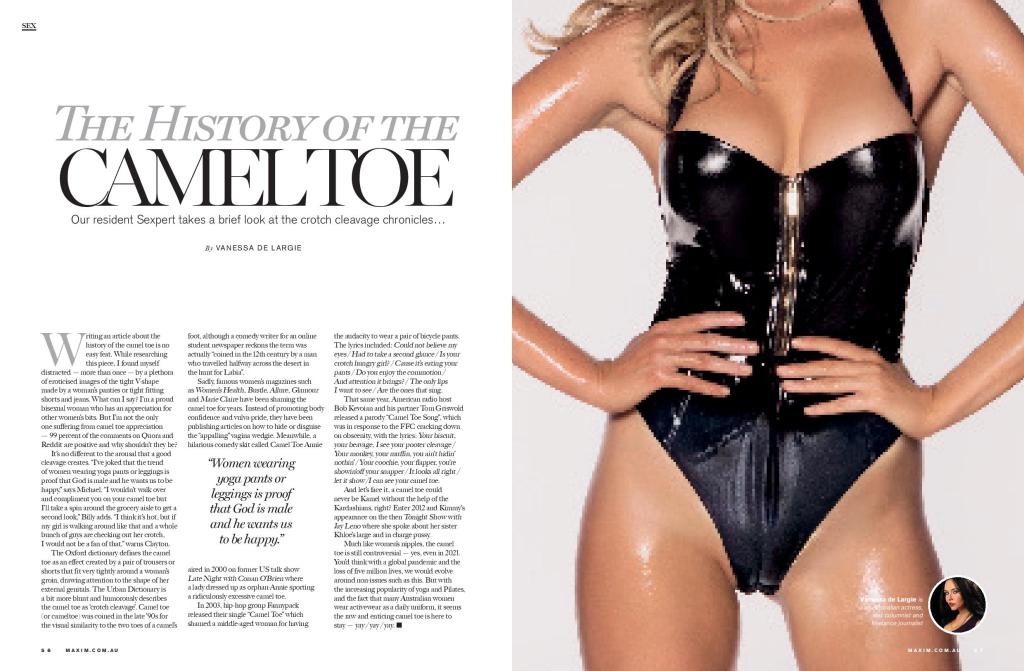 Writing an article about the history of the camel toe is no easy feat. While researching this piece – I found myself distracted – more than once – by a plethora of eroticised images of the tight V-shape made by a woman’s panties or tight fitting shorts and jeans. What can I say? I’m a proud bisexual woman who has an appreciation for other women’s bits. But I’m not the only one suffering from camel toe appreciation – 99% of the comments on Quora and Reddit are positive and why shouldn’t they be?

It’s no different to the arousal that a good cleavage creates. “I’ve joked that the trend of women wearing yoga pants or leggings is proof that God is male and he wants us to be happy,” says Michael. “I wouldn’t walk over and compliment you on your camel toe but I’ll take a spin around the grocery aisle to get a second look,” Billy adds. “I think it’s hot but if my girl is walking around like that and a whole bunch of guys are checking out her crotch, I would not be a fan of that,” warns Clayton.

The Oxford dictionary defines the camel toe as an effect created by a pair of trousers or shorts that fit very tightly around a woman’s groin, drawing attention to the shape of her external genitals. The Urban Dictionary is a bit more blunt and humorously describes the camel toe as ‘crotch cleavage’. Camel toe (or camel toe) was coined in the late ’90s for the visual similarity to the two toes of a camel’s foot, although a comedy writer for an online student newspaper reckons the term was actually “coined in the 12th century by a man who travelled halfway across the desert in the hunt for Labia”.

Sadly, famous women’s magazines such as Women’s Health, Bustle Allure, Glamour and Marie Claire have been shaming the camel toe for years. Instead of promoting body confidence and vulva-pride, they have been publishing articles on how to hide or disguise the ‘appalling’ vagina wedgie. Meanwhile, a hilarious comedy skit called Camel Toe Annie aired in 2000 on former US talk show Late Night with Conan O’Brien where a lady dressed up as orphan-Annie sporting a ridiculously excessive camel toe.

In 2003, hip-hop group Fannypack released their single ‘Camel Toe’ which shamed a middle-aged woman for having the audacity to wear a pair of bicycle pants. The lyrics included: Could not believe my eyes / Had to take a second glance / Is your crotch hungry girl? / Cause it’s eating your pants / Do you enjoy the commotion / And attention it brings? / The only lips I want to see / Are the ones that sing.

That same year, American radio host Bob Kevoian and his partner Tom Griswold released a parody Camel Toe Song which was in response to the FFC cracking down on obscenity, with the lyrics: Your biscuit, your beavage, I see your pooter cleavage / Your monkey, your muffin, you ain’t hidin’ nothin’/ Your coochie, your flapper, you’re showin’ off your snapper / it looks all right / let it show / I can see your camel toe.

And let’s face it, a camel toe could never be Kamel without the help of the Kardashians, right? Enter 2012 and Kimmy’s appearance on the then Tonight Show with Jay Leno where she spoke about her sister Khloe’s large and in charge pussy.

Much like women’s nipples, the camel toe is still controversial – yes, even in 2021. You’d think with a global pandemic and the loss of five million lives, we would evolve around non-issues such as this. But with the increasing popularity of yoga and Pilates, and the fact that many Australian women wear activewear as a daily uniform, it seems the raw and enticing camel toe is here to stay – yay / yay / yay.