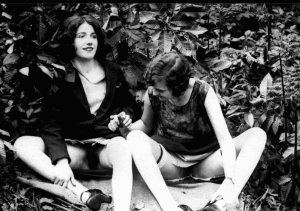 I have always been interested in sexual women – mistresses, concubines, adultresses, whores and erotic artists. And when I say “always” — I mean from when I was a child. It began when I would watch 1940s and 50s films with my parents. Who were these women that controlled men’s cocks? And what drove them? These outliers always looked so carefree to me. Whereas ordinary women seemed so contained in comparison — so rigid.
There is a raw honesty about sex. When I am being fucked it’s as if everything else falls away — much like death. Perhaps that is why the orgasm is called La Petite Mort (little death). The bullshit, the mask and the ego cease for a few brief moments.
I am also interested in male sexuality — the ruthlessness, the brutality, the taking of. In a book written by English painter, Billy Childish — he reminisces about fucking a poor, unintelligent woman arse-to-mouth in his run-down flat and the enjoyment he derives from the degradation. I’m not particularly interested in arse-to-mouth myself but I was excited by the honesty of the writing. I was in my twenties when I read it and my jaw was literally parked on the floor — speechless. The courage — the vulnerability. That is the type of writer I aspire to be.
Another author that stays in my mind when I think about sex writing is the great Irish novelist — James Joyce. In his filthy letters to his mistress Nora, he speaks about fucking her in laneways anally with pieces of hardened shit dropping out of her arse. Again, mind blown at the authenticity.
Can you imagine if Joyce or Buk or Childish had have been born and bred in Australia? We wouldn’t know of their names today. The gatekeepers wouldn’t have allowed it. Australia, the so-called land of the free. Pig’s arse.
I’ve been told by numerous editors in Australia (and I have the emails to prove it) that if I’d just be willing to tone myself down, take the nudes off my website and stop the profanity in my writing — my journey into the mainstream would be one of ease. But I won’t do it because it would be a lie. I would rather stay on the outskirts forever living my truth. I have dignity.
The photo attached to this piece of writing was said to be taken somewhere between 1925 – 1930 by photographer — Monsieur X. The girls worked in a brothel on the Rue Pigalle. Look at how playful they look, how full-of-life.
I cannot help wondering what their stories were. Were they artists who did sex work on the side to fund their art? Were they mothers and wives? Or did they just love cock like myself?
I have never looked at a sexual woman and not seen the human being first because I am a sexual woman.
I am them.
They are me.

Most Popular Sex Columns Of All Time

Why I Love Sex Facials