Handsome is as handsome does, Handsome Her

Last year, Handsome Her (a misandrist vegan cafe based in Melbourne) hosted an event titled: Can You Be A Feminist And Still Fuck Men?  To jog your memory, the event’s tagline was:

With the majority of domestic and emotional labour STILL falling to women and orgasm rates the lowest amongst heterosexual females, can women reach their potential whilst spending their lives with men? Do we need to cut off the ball and chain and fully reject the patriarchy?

At the time, I was so appalled by the cafe’s blatant man-hating event; I wrote a column about it for The Spectator.

The cafe became an ongoing hot topic within the media for it’s reverse sexism. With the staff charging ‘man tax’ (an 18 per cent surcharge) to male customers (to reflect the mythical gender pay gap) whilst giving priority seating to humans with pussies.

Well, I have some pleasing news to share. Handsome Her closed their doors yesterday and I think it’s high time to crack open the bubbly and bring forth the charcuterie platters.

On Facebook, ‘Handsome Her’ moaned about the explosive reaction to man tax:

It showed us how fragile masculinity is and solidified the necessity to confront and dismantle patriarchy. We became the punching bag of Melbourne and the Internet.

Oh please, enough of your feminist tears! Did Handsome Her seriously believe that discriminating against men via token’ publicity stunts would somehow solve gender equality?

Handsome Her denied their infamous ‘man tax’ had put them out of business. Instead the owners claimed they had sold their biz because they are ‘young, educated and off on their next adventure’.

Educated but unable to see the hypocrisy of their own position? Because discriminating against the gender you seek equality with makes a shitload of sense.

Farrell repeatedly exposes male disposability within society, highlighting the numerous disadvantages men face and how this often concludes in early death or suicide.  It’s a book that needs to be revisited in 2019. Its’ arguments still stand strong.

Currently, we have a global male suicide epidemic with Aussie blokes three times more likely (than women) to take their own life. On top of that, men’s life expectancy is lower. Seriously, what does shitting all over men achieve in the long run? Not much.

If you’re a black man, a gay man, a Muslim man, a disabled man, a trans man or a man that identifies as a dog — you may be able to escape unscathed by feminism.

Handsome Her went out in true martyrdom-style with their last day in business titled Pay As You Feel — all proceeds going to Maiti Nepal. And here I was thinking ‘Handsome Her’ would donate their proceeds to the Australian families who’d lost their sons, husbands, brothers and fathers to suicide in 2019.

Remember Rule # 3 on the blackboard at Handsome Her.  It says in bright pink: Respect goes both ways. 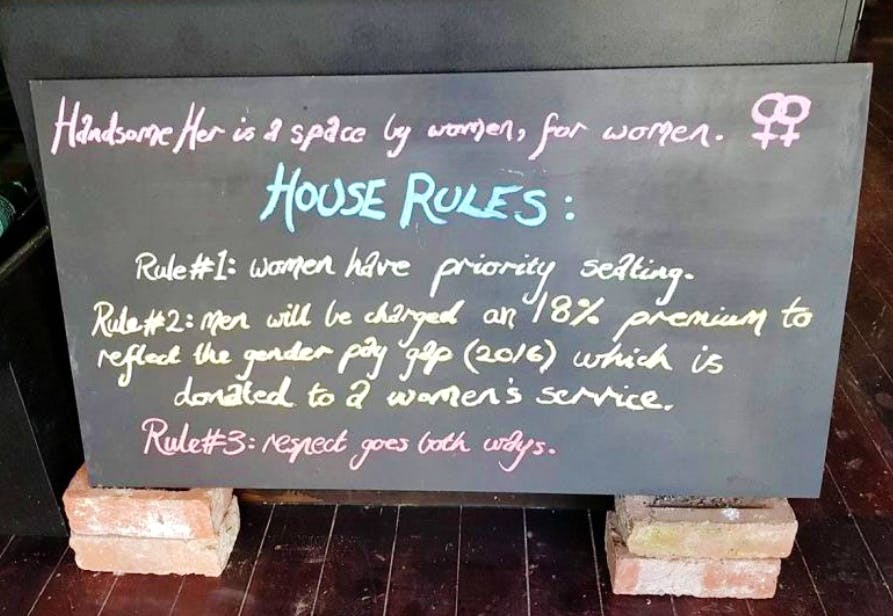 You’re correct. Respect does go both ways. Perhaps you could give your own wisdom a test-run while you’re in between jobs.

The Hidden Victims of DV

Having a healthy sex life after sexual assault